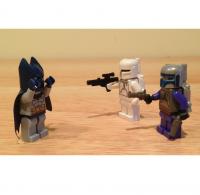 So I finally sold my 10123 Cloud City after 10 months of trying.  I had many bites (mainly US, UK and Australia) but people kept  complaining about the cost of postage (not my prob as including

This is the route I would go as well. You basically got it for almost nothing. Have some fun with it. Somebody will pay you some decent money for it. Just make sure the auction ends on a Sunday night