You expect anything worthwhile to come from the huffington post? 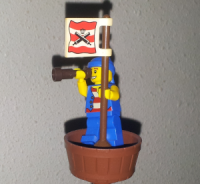 Adding my weight to Dolphin Cruiser. I see very limited stocks on the shelves, so it must either be doing well or has low production. Either one makes a winner. I think I'll buy one to mod

As the proud Mama of two girls, I am unoffended by pink bricks.   I have a tomboy who dresses in black and gray and watches football with me. I have a princess who wears pink and peach and