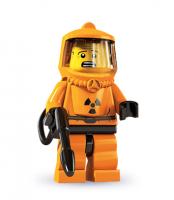 I wouldn't be surprised if it sold for less in two years after eol than in 6 months. Kids may not even remember what Chima was in 2 years.