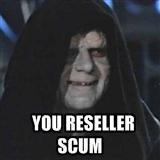 Are Lego Star Wars Rogue One and The Force Awaken's Millennium Falcon sets retiring this year?